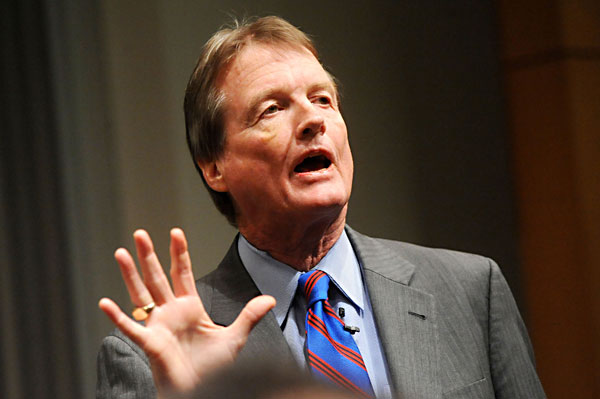 UT President Bill Powers was a proponent of diversity and reached out to the East Austin community in a variety of ways.

I’ll never forget the first time I met Bill Powers. He was the Dean of the UT Law School at the time, and I was the Director of the Center for European Studies. I was looking for funding from the law school for a conference I was working on. I went into Bill’s office and there he was, larger than life, chewing on a cigar with his feet up on the desk. Needless to say, I was a bit intimidated, but he immediately put me at ease.

Little did I know that in only a couple of years he would be the president of the university and I would be a vice-provost in his administration. In 2006, Bill was responsible for implementing a new strategic vision for undergraduate education at UT, creating the College of Undergraduate Studies and signature courses which connected freshmen with the “treasures” of the university, including our museums and our best faculty. With his support, the College of Liberal Arts added new majors in European Studies and International Relations/Global Studies.

My favorite memories of Bill are traveling to Mexico to develop relationships with top universities there, giving life to the school’s motto, “What Starts Here Changes the World.” Bill was tireless in his efforts to promote diversity. We traveled across Texas to recruit students from high schools that hadn’t traditionally sent students to UT. He supported the Longhorn Scholars program with presidential scholarships and was a tireless advocate for the university’s right to recruit a diverse student body.

One moment I’ll never forget was the day after a student had walked onto campus with an assault rifle. I had seen the police SWAT vehicles heading to campus, and it was an incredibly scary moment for all. The student went into the library and took his own life. Fortunately, no other students were harmed. When I saw Bill the next day, I told him that I was thankful for his leadership during that difficult day. He commented on how lucky we were that the student hadn’t turned the gun on other students. His concern for the students and the campus was palpable.

Bill was popular because we all knew he cared for the students and the faculty. He fought for us, and we supported him in that fight to maintain UT as a leader in higher education. I will always appreciate his support for me in my role as an administrator and he will always be remembered for his impressive accomplishments in every aspect of his professional life.

This website uses cookies to improve your experience while you navigate through the website. Out of these, the cookies that are categorized as necessary are stored on your browser as they are essential for the working of basic functionalities of the website. We also use third-party cookies that help us analyze and understand how you use this website. These cookies will be stored in your browser only with your consent. You also have the option to opt-out of these cookies. But opting out of some of these cookies may affect your browsing experience.
Necessary Always Enabled
Necessary cookies are absolutely essential for the website to function properly. This category only includes cookies that ensures basic functionalities and security features of the website. These cookies do not store any personal information.
Non-necessary
Any cookies that may not be particularly necessary for the website to function and is used specifically to collect user personal data via analytics, ads, other embedded contents are termed as non-necessary cookies. It is mandatory to procure user consent prior to running these cookies on your website.
SAVE & ACCEPT